A Tribute to the Great Dr. Jerry Buss, the Forefather of Tribe Investing 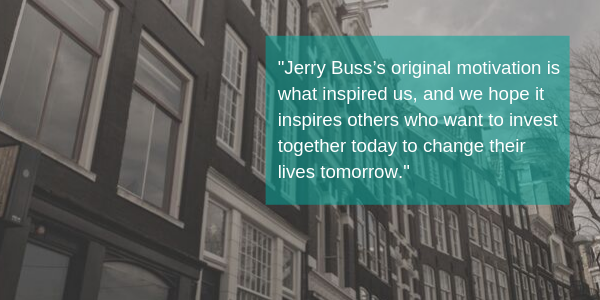 Many of you know the story of how my three brothers and I formed what eventually became TribeVest’s first Tribe. And the moment that changed our lives forever: when we realized how we could overcome our biggest obstacle to realizing our investing dreams.

That moment was when the four of us committed to each other to save a manageable monthly contribution of $500 a month. To this day, we still make the same monthly investment into our Tribe’s shared bank account. And over a decade later, the result is an investment company that has changed our respective families’ lives forever.

We were always motivated to invest together for fun, togetherness, legacy, and financial freedom. But what pushed us to the moment of our breakthrough was when my brother, Kevin, shared an article about the legendary Dr. Jerry Buss, owner of the L.A. Lakers from 1979 until his death at age 80 in 2013.

The “tribe investing” approach seed was planted for me then. It was the answer to the “how to” we needed to take that critical first step.

According to all accounts, Buss’s first investment was $1,000 in 1959 that he put into a West Los Angeles apartment complex.

He and five others each invested $1,000 and put a $6,000 down payment on a 14-unit apartment building they purchased for $105,000. Buss had squirreled away $83.33 per month over the course of a year to amass his initial investment. Exactly twenty years later -- when he was worth an estimated $50 million personally and his business worth close to $350 million -- he wrote a check purchasing the L.A. Lakers basketball team, the NHL's Kings, the Forum and a sprawling ranch in a mass deal with former owner Jack Kent Cooke.

The rest, as they say, is history.

We took that step in 2006 and have been investing $500 per month into our shared TribeVest bank account ever since.

Jerry Buss’s original motivation is what inspired us, and we hope it inspires others who want to invest together together today to change their lives tomorrow. Buss simply wanted to supplement his regular income from working as a chemist in the corporate world -- a job he hated. He wanted to make enough money from investing in real estate to become a full-time professor and attend more L.A. Lakers games.

But what he ended up doing was starting a micro-business with his friends that eventually turned into a primary business and changed his life.

First, he formed his Tribe -- himself and five friends that he hand-picked to invest with him.

Then, he created a Micro-Business, which leverages the owner’s already existing assets.   A Micro-Business contributes to the owner’s secondary source of income and security and its business operations require less time, money, and resources.

Over two decades’ worth of savings and investing in multiple real estate deals, that micro-business became Buss’s Primary Business -- a business which contributes to the owner’s primary source of income and security and requires significant time, money, and resources.

For many TribeVest tribes, that’s the ultimate goal. For others, it’s simply the achievement of any number of Dream Investments in and of themselves.

But on either pathway, it’s not the actual Dream Investment that’s the life-changing part. For Buss, buying his first 14-unit apartment business didn’t deliver the “promises.”

Forming his Tribe, which led to his Micro-Business, was what delivered the promise of the Dream Investment for him.

At TribeVest, we believe that it can for us all.